Welcome to the home of Max the SV-ROS entry into the 2016 Nasa Sample Robot Return Challenge.

While we made our run. First one to do the level 2 attempt over the Labor Day weekend 2016.

We came really close to being in the money. Overall got 2nd place by getting 3 points on the platform.

We might even had been in the money if WPI put the pre-cache where they said they were going to.

To give you an idea of what an achieve this was/is for our team.

Now trying to figure out what to do with the 2 bases we have. If you have any ideas please let us know.

Check out our Video from the Event. Thanks Girts.

Over Labor Day 2016 We were the first to run:
We came so close to being in the money another 10 minutes we would have done it. 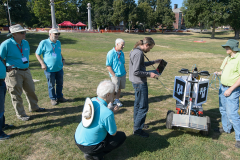 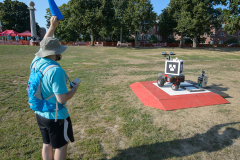 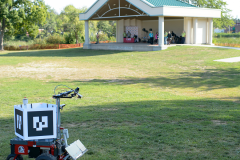 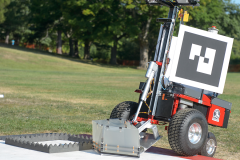 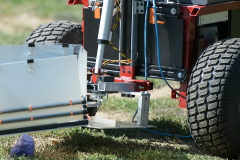 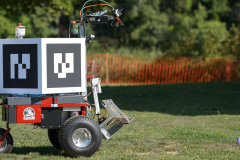 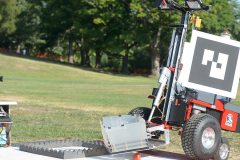 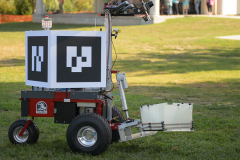 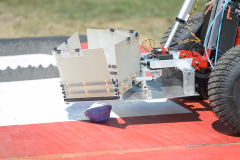 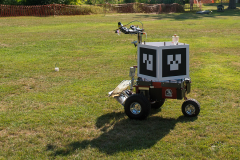 Maxed-out is a group of robot / computer enthusiasts  “geeks” working on the harder robot problems around perception and space mapping.  I / we  are currently reworking the idea of perception from planer to spherical. Trying to use vectors from dual fish eye camera systems to give consistent localization and object tracking via vectors.

This is cool because the spherical images are fully VR / AR capable, so can create some very cool user experiences.

We are registered to compete in the DARPA  SubT Challenge, With possibly fielding a solution for the deep, dark, dirty and dangerous aspects of the tasks. It is really a scavenger hunt in the dark.  We are working on flying fiducial for localization. building of the base tracking of Max in the SRRS challenge.  This adds drone to our tool box. Figuring 2019 will be the year of the drones for me.

Hard part is trying to use the newest tools on Hardware that is not set up for Ubuntu 18.04 and ROS Melodic.  Have it working on Raspberry Pi 3, Nuc, Fang but not yet on the Jetson TX2.

Maxed-Out is now registered and trying to field an autonomous robot to compete in the physical part of the Darpa Subterranean Challenge Details are on their website. http://subtchallenge.com This is a scavenger hunt in the dark. Difference is we only have to accurately map the objects we do not need to pick up and bring …

END_OF_DOCUMENT_TOKEN_TO_BE_REPLACED

The challenge is using ROS Melodic which runs on ubuntu 18.04 on raspberry pi’s and Jetsons.  Lots of issues since neither the Raspberry or Jetson TX2 support 18.04 yet.  So far have updated the following to Ubuntu 18.04 and ROS Melodic  NUC will start running the base station AR tracking from it.   Raspberry Pi …

END_OF_DOCUMENT_TOKEN_TO_BE_REPLACED

Hello Everyone, Bring Maxed-Out back to life here in Gig Harbor. We moved up the the Pacific Northwest in June 2017. Purchased a house in November 2017. After getting settled and acclimated time to forget the past and focus on the future of Max. I am fortunate to be working with a large group of …

END_OF_DOCUMENT_TOKEN_TO_BE_REPLACED

2013
It all started in Late 2013 when my wife and I started the SV-ROS Meetup. A Silicon Valley based Robot Operating System Meeting of “Birds of a feather” as a spin off of the Home Brew Robotics club. We meet the week before the HBRC last Wednesday of the moth.

The first SV-ROS meeting was at the Hacker Dojo, Wednesday November 20th 2013, and was very well attended about 34 people came and checked it out. Lots of interest and even a few of the OSRF folks showed up. This was amazing a very specific topic had so much interest and people in the area to attend. If we tried the meeting in Orange County where I was working with the RoboSub vehicle I would have had maybe 5 if we were lucky.

2014
We had a few training session on how to do ROS on BeagleBoneBlacks, The Raspberry Pis did not have enough horsepower at that time to run ROS.  But to keep people interested we needed a “Project”.  Mardi found the Microsoft Kinect challenge which was Sept 15th 2014 in Chicago. The group was verify interested. So we spent the summer hacking away and  we won First Place and a $5,000 prize. I did not even remember there was award money. That night in our hotel room,  we wondered what to do next. Mardi again, found the NASA Centennial Challenge. Sample return robot Challenge SRRC. Which in hindsight turned out to be a lot of work and money. Could not have done it without the support of SV-ROS and HBRobotic Club members.

2015
Was all about getting a robot together for a the SRRC’s June 7th competition. We worked out of the  garage on Helweh Court, San Jose and test runs at a local park and at the Rose Garden. We built the robot by committee. Each person adding their experience to solving the problem in their domain. The day of the competition was the most stressful thing I had ever done and it was an absolute failure.  We did not even get off the platform.

Fortunately, we had good company in the same situation and the teams that looked like they would collect all the prize money also did terrible. With a $1.5 million purse only $50,000 was awarded, the NASA and WPI folks decided to have one last run in 2016.

2016
This SRRC attempt, with some hindsight, and   a little experience. I focused on simplicity. We created Max with far less moving pieces. I created a simple gripper based on a corral being lowered over the sample and it closed onto a tray that would then lift and the sample carried to the platform. All tracking of the robot was done via a PT camera system located at the base that was watching the fiducial on  Max telling him where he was.  Max smarts  was completely done by Girts Linde, He was truly dedicate and we lived together every lunch and dinner for 4 months.

Good enough to get second place because we got two samples on to the platform. and if WPI had put the pre-cache where they said they where going to put it we might have been in the money. Has taken more than a year, not to be pissed off about them being cheap. We did something really impressive, beating 44 other teams with hard work and zero luck.  Looking back it was a great experience and I miss the all the people that gathered for the event.

2017
We moved to Gig Harbor WA in June and pretty much was not thinking about robots and still trying not to be mad at WPI. We were so close. Really saw no future for MAX  and was shifting over to Neato Botvacs for home inspection, object detection using spherical images.  We then moved in November and set up house finally in home we owned and do not plan to ever move again. The new house has a great Studio.  But still had so many distractions and not much ROS or robots.

Figured Max would be great at power washing the concrete. Want to do something to map the property we have 4.3 acres and about 1.5 acres of it is garden. Just knowing where each type of plant are what they are doing in time “seasons” during the year would be a cool project.  Figured a drone and some VR images.

2018
Once settled into the new house, new job, etc we had 7 sets of visitors over the summer and finally Paul Ekas  invited me to participate in a JD industry picking competition in China that got me moving again about robots.  I made a mini Max but being in Gig Harbor was  a draw back. They are off to China hopefully to win something and gather invaluable experiences under the pressure of deadlines.

I have decided to try to work with some of the people at work and take on the Darpa SubT challenge. Have been gearing up for how to tackle those .  Doing the planning process of laying out technology and how to be better than anyone else at the challenge.  So pretty much trying to be fully engaged in  making this work.

2019
Is a few weeks away,  Looking to have a Tracked Max, flying fiducial sand a cool mapping system in the dark, ready for the August Darpa Tunnel event.  So much too do so little time…